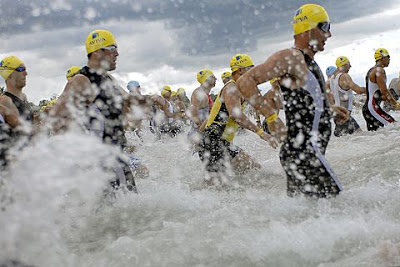 Tribob, the organizers of the Bintan Triathlon 2007, invited me to speak and compete in this year’s event which attracted 1,000 athletes. Agreeing, I prepared 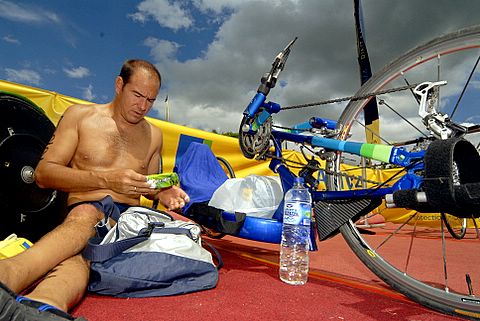 my body and talk for what lay ahead which included an Olympic distance Triathlon meaning 1.5km ocean swim, then a 40km bike ride followed by a 10km run. Angie and I bundled up all my equipment and her cameras and ferried over to the island.
Weather looked promising at the start of the swim and the mass of bodies plowed their way into the sea and waves. Starting in the water as I did, I was surprised to be 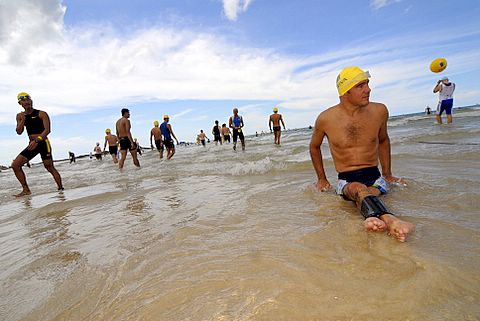 passed by the pro athletes almost immediately. They buzzed by and a small pack caught up with me soon after. Weaving my way through the swimmers avoiding the 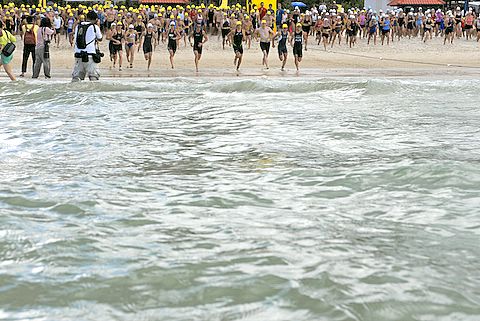 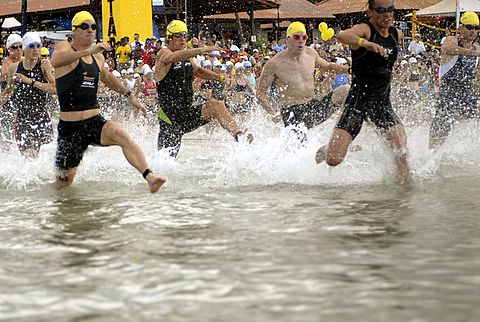 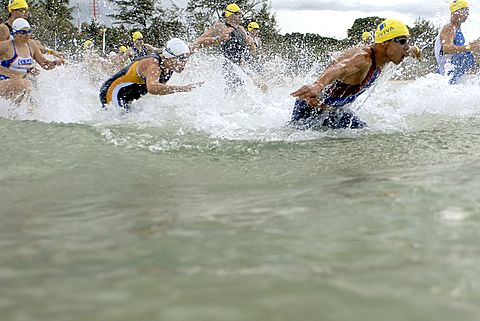 occasional thrasher, I made fair time and finished the swim in under 25 minutes, coming out of the water in 40th place. 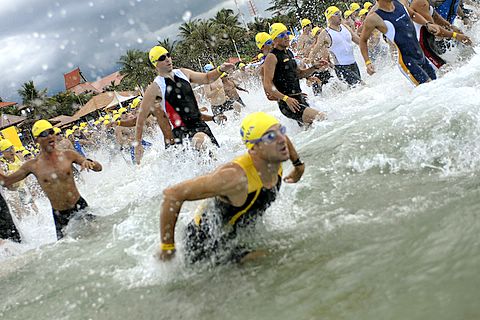 With the support of two seconded local firemen swept me off the beach and back to transition. 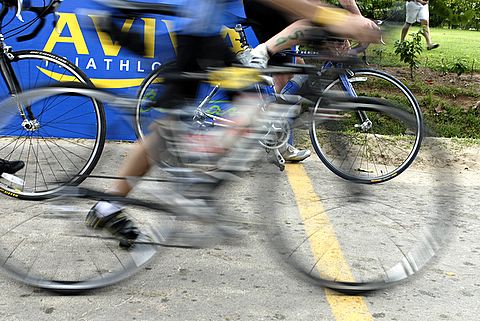 From here we headed into the bike ride which thankfully had only a handful of steep inclines. Mother Nature decided to challenge us a bit more and brought thunder, lightening, wind and monsoon rains for us to battle. 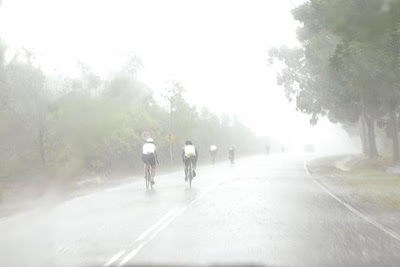 Despite the water and hills, I managed to finish the bike in 100 minutes. Ben 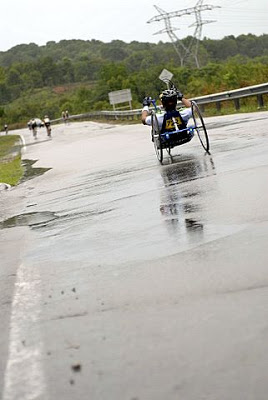 Munroe, our good friend and the editor of our book ‘Painted Journey’, put in a heroic swim and bike, passing me just prior to transition oblivious of his broken finger which he’d suffered in training the week before.
Then my real challenge loomed before me.
The run through the golf course along the buggy path offered four major inclines with grades of up to 12%. My racing wheelchair, being very good on flat roads, 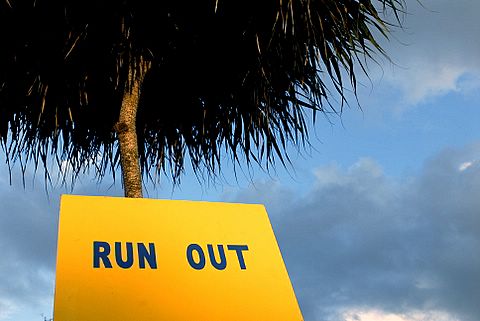 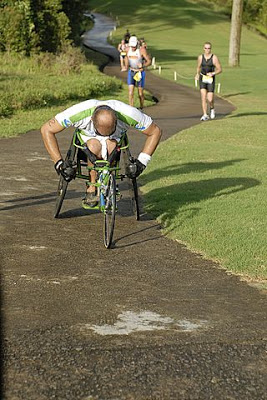 reared up and complained that the steep windy path was less than manageable. Moving slowly through the course, I managed to navigate the mud and sand but the combination of this and the leftover rain made the run very trying and somewhat dangerous as I could not manage to control the chair on the downhills and at one time veered off of the path and into the golf course and bounced off a tree.
Thankfully, our buddy Doctor Low was there to 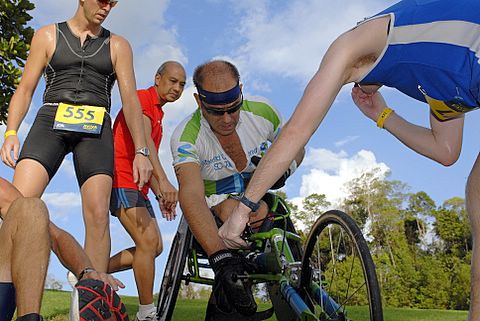 survey the damage and confirmed that the tree was worse off than my bruised back. With the help of several tired runners, I was poured back into my chair and continued. 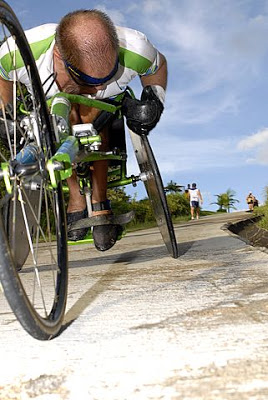 Soon however, due to the steepness of the inclines, I was forced to turn my chair around and creep backwards up the slopes. This took much extra time but at least I could reach the top. After cresting the final hill, the front tire of my chair exploded while trying to slow down. Heading to the transition area to change the tire, my right tire blew up as well. Fortunately I did have one of each with me. Then after spending half an hour trying to fix them, I discovered much to my dismay that both 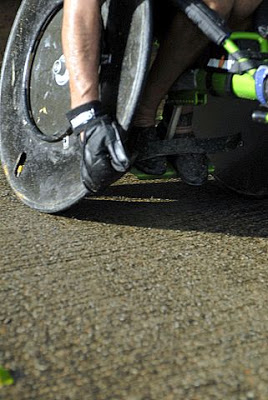 spares were faulty. Left with no other choice, I thought to complete the second 5kms of the run on my crutches and braces. But all this was far away in our room and I had no key. With the cut off time for the final lap approaching, I jumped onto my bike and was given permission by the race organizers to carry on. I sped off for the final loop. But on the first hill, my chain derailed. Fortunately, this was the final cock up for the day and I crossed the finish line in just a tad over four hours. My 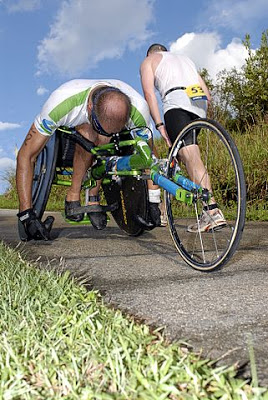 body held out and after the trauma of the Ironman event, this seemed rather tame. Looking forward, I set my sights on the 70.3 Half Ironman race in Singapore later this year. See you then. 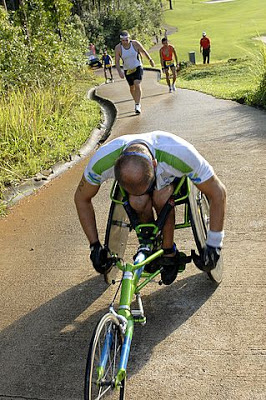 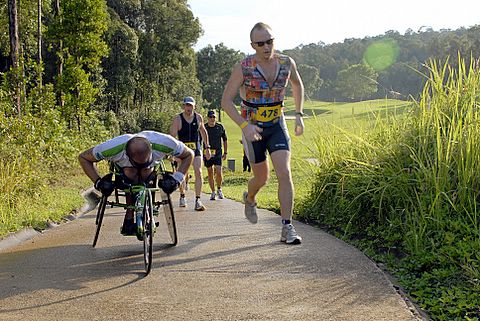 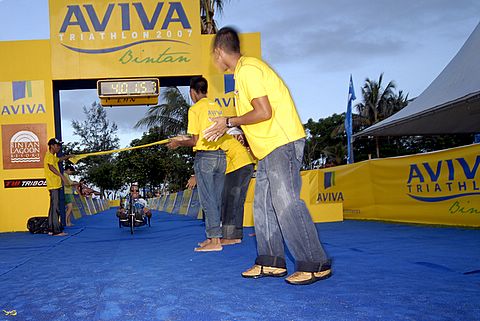 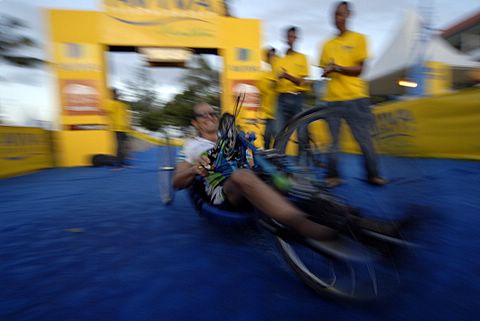 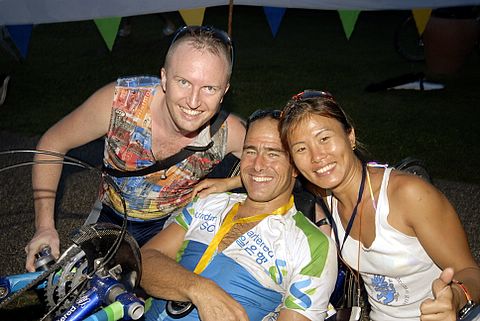 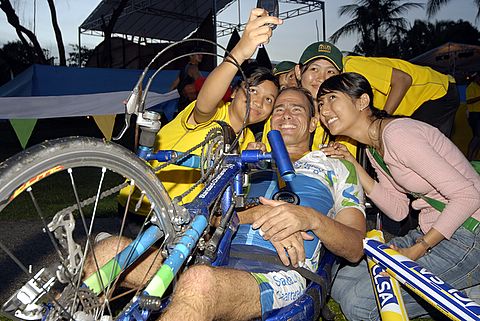