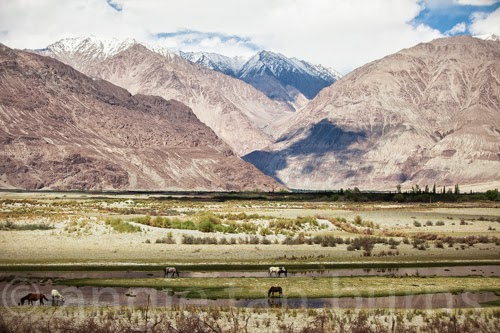 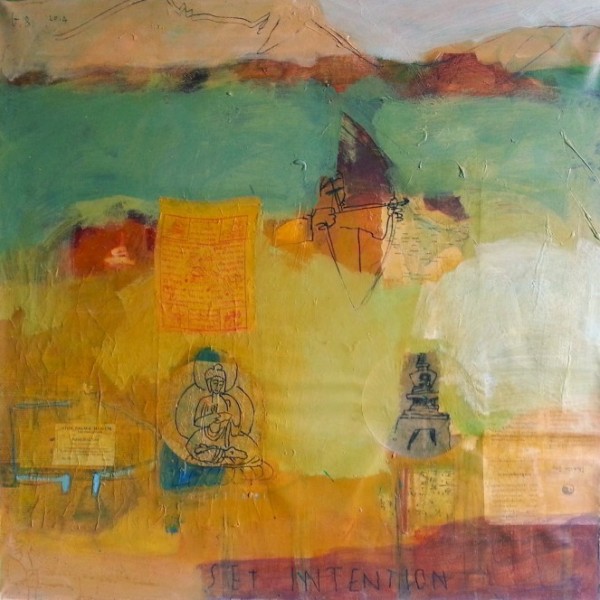 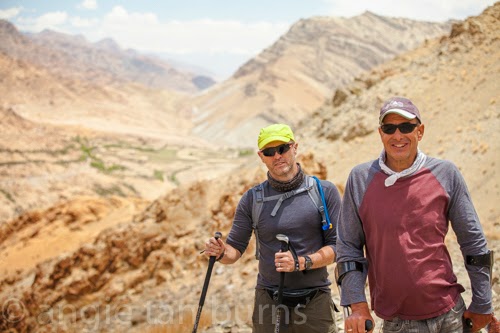 What started out more than a year ago as a simple statement, “We should do something together” finally came to fruition as Paul (who broke his neck three years ago while cycling) and I (who contracted polio as a child) walked under a string of prayer flags fluttering in the wind in Ladakh, India. We had completed our 35-kilometer trek over four mountain passes (ranging from 3600-3900 meters above sea level) and we were still smiling. 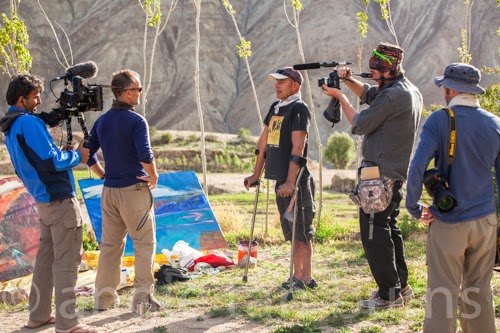 The adventure had sparked interest from Paul’s company, Diageo, which agreed to sponsor our expedition. In addition, they would send a professional film crew along with us to make sure the journey was recorded properly. Our shared intention was to complete this rigorous trek while my singular goal was to complete a series of four large paintings along the way, which embodied the journey. 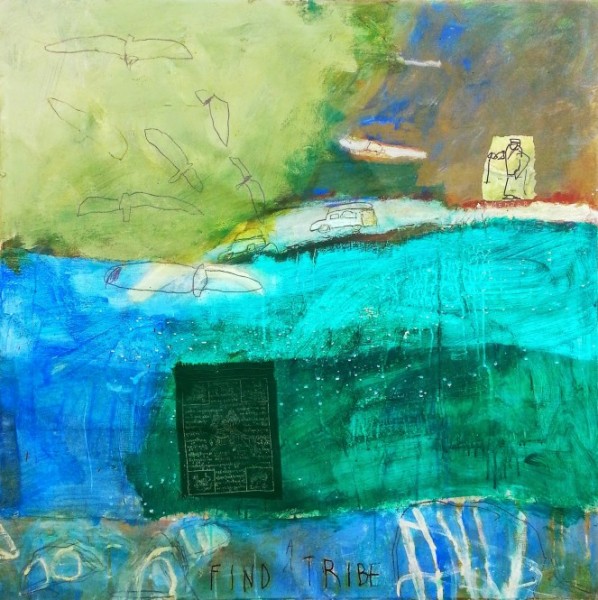 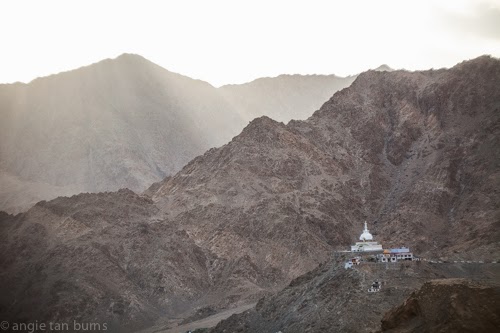 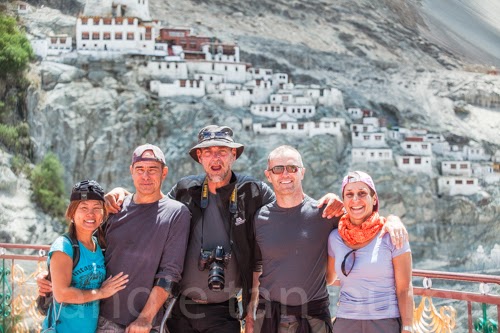 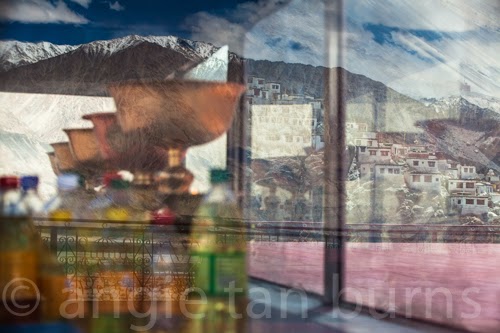 Our small tribe slowly gathered in Leh and included Angie and myself, Paul and his trainer Viv, Alan our mountain guide, Scott the photographer, Mike the producer with his film crew along with a nine member support team. 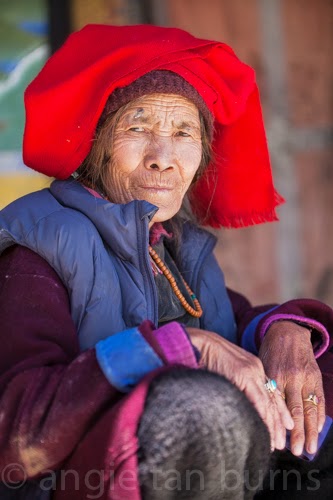 The military and monasteries are deeply embedded in the region so Leh is a very protected place. With its predominantly Tibetan feel, the village-like atmosphere is welcoming and colorful with ancient wrinkled men and women ambling the dusty streets with little urgency or anxiety. Perhaps it is the altitude but we too seemed to be moving in slow motion. 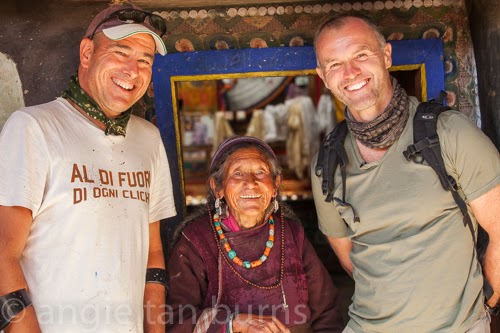 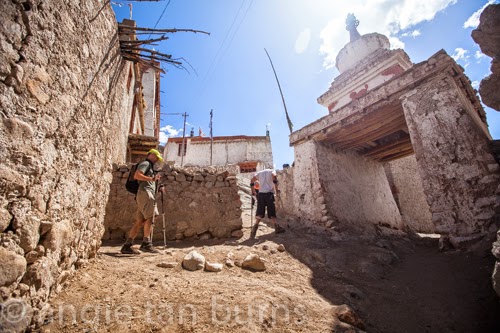 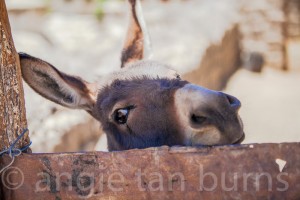 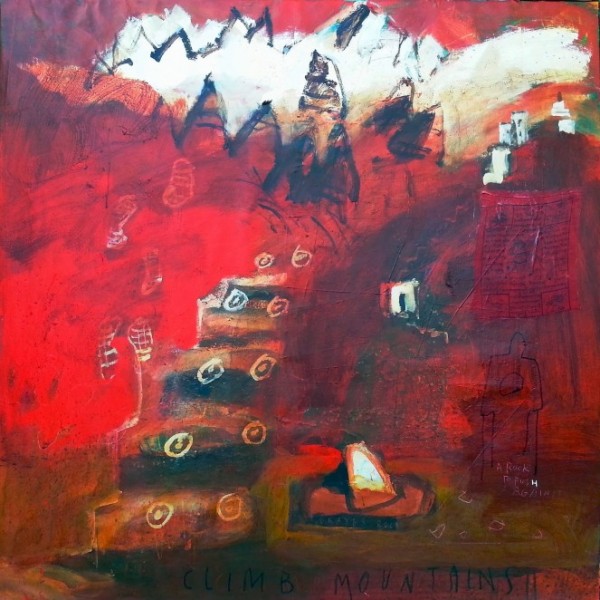 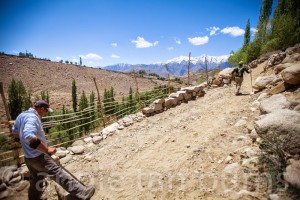 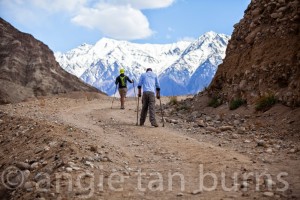 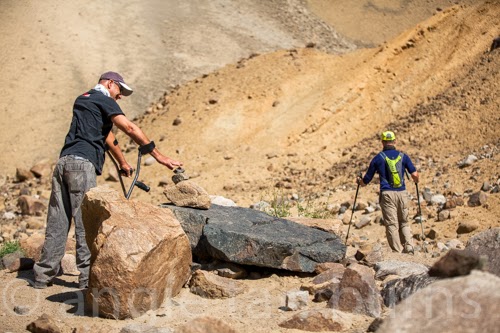 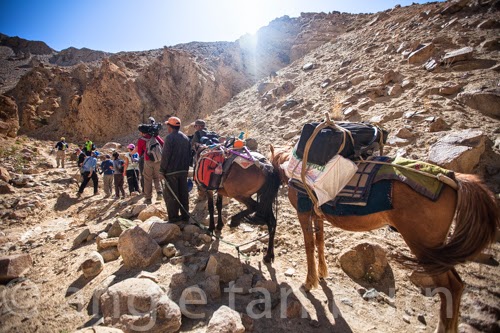 The first day of our trek took us up and down steep hills on narrow mule tracks. Rocky terrain would be the norm for the rest of our hike as Paul and I began to realize the extent of the challenge before us. What we were told was to be a 7km walked stretched into 9.5kms as we finally reached our campsite after 7 hours. 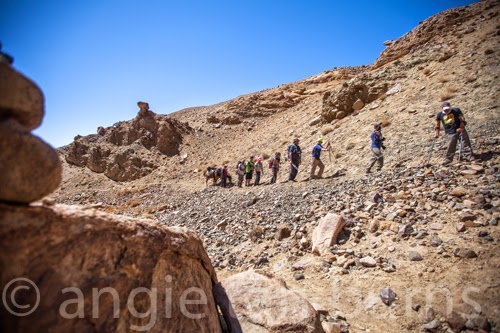 Exhausted, the sight of bright blue and orange tents nestled into the field surrounding an old farm house brought us joy after the final steep descent through shifting sandy and rocky terrain.

After a good meal and nights rest our second day started with a stretch of trail beside and over a lovely rushing stream followed by a steep climb out of the valley. The otherwise parched dry landscape was awash of green in this oasis where life giving water was available. We hiked all day, covering another 5.5kms after reaching a pass of 3700 meters. Day two seemed slightly easier than the previous day, which gave us all confidence that we had found our groove. 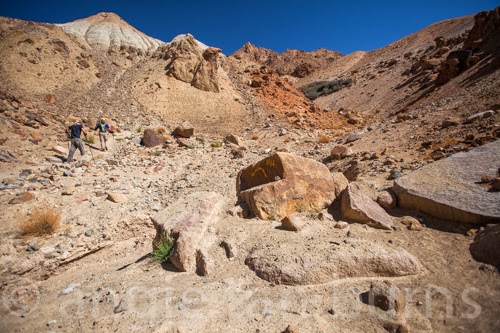 Day three started out with an upset stomach for me. Perhaps it was because I had accidentally brushed my teeth with shaving cream the night before or it was from some contaminated water I had consumed, but my boules were not in good spirits. The climbing soon became slow and labored. Paul’s good spirits kept me going and not concentrating on the dire straits I was in. Soon I realized that I was seriously ill and each step was labored. While Angie and the film crew shot pictures and video, I slipped into a funk. 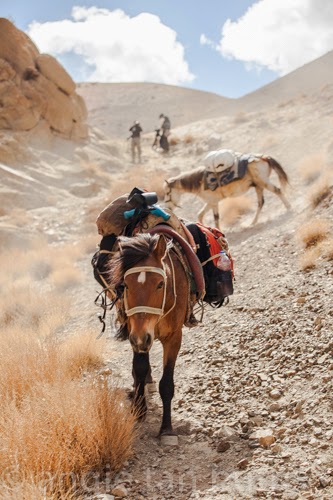 Gradually the 3900-meter pass came into view. One lesson I leaned was that when the going is tough, it is best not to look up to see what is ahead. What we don’t know won’t discourage us. Unfortunately I didn’t follow my own advice and looking up to the steep climb ahead made me even more tired. But finally with the encouragement of the team, I rallied and reached the pass and walked under the stream of prayer flags fluttering in the strong wind. 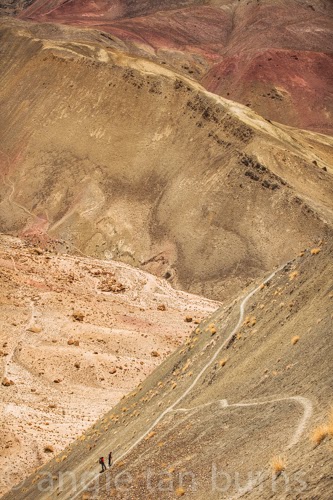 The opening act on our final day of the trek offered a fine wide path. With renewed energy, my mantra for the trek became clear; “Re-challenge, Reinvent and Recharge”. The trek had helped me to focus on what was important. Up and over the first low pass and onwards down into the valley and the start of the second and main pass, everything went smoothly. Then, as we looked up at the steep wall of scree and rock before us, we could just barely pick out the thin trail line which switch backed its way up the mountain. This turned out to be the most narrow and slippery stretch of trail we had yet encountered. With quicksand like tiny gravel pieces several inches deep sliding under foot and crutch, the going was slow. I needed to turn sideways and make my way up the mountain. Identifying any solid piece of ground or stone that would not give way under my stick became my challenge. As this game of slip and slide continued, I was struck with how as human beings; we all need to find something hard to push against in order to make progress. That rock must be within us and is called inner strength. It helps us to overcome challenges. I needed a rock today in order to reach the pass still high above. After what seemed like eternity, the pass came into view and I finally joined Paul and the gang on top of the world. 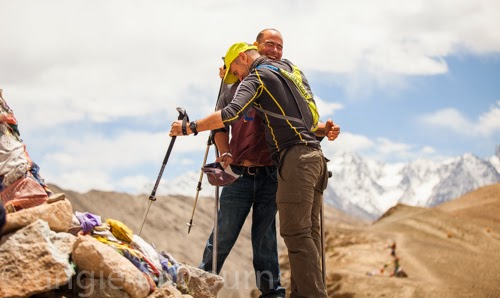 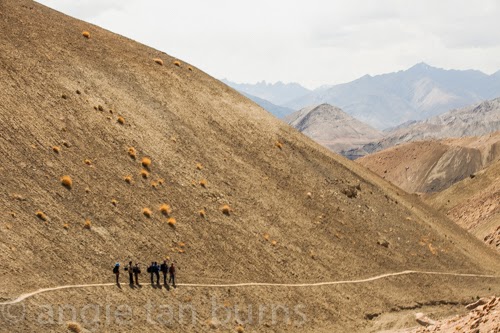 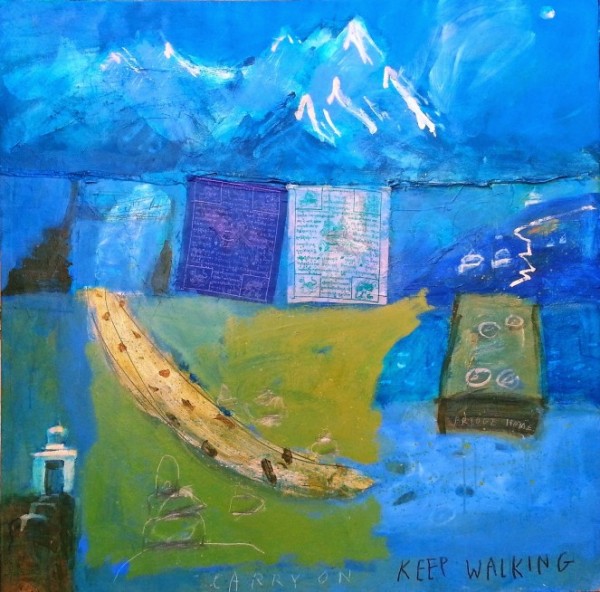 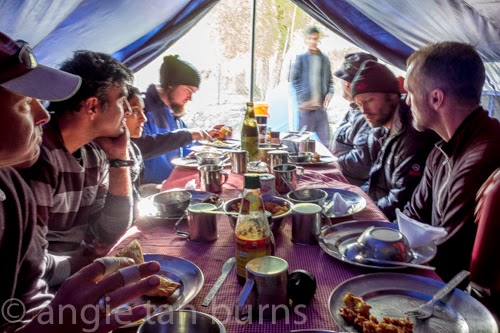 After breakfast the following day, we had a leisurely stroll down the road to meet our vehicles. Crossing under a set of prayer flags, Paul and I looked at each other with deep understanding as we began to acknowledge the magnitude of our accomplishments. Though we each had different reasons to be elated, we shared a bond and appreciation of just how wonderful this moment and journey had been. The experience had changed us both and we have become better people in body, mind and soul. From here on, we would both walk taller.