Wishing you all a great  2015 ahead and
may we start the year with gratitude. 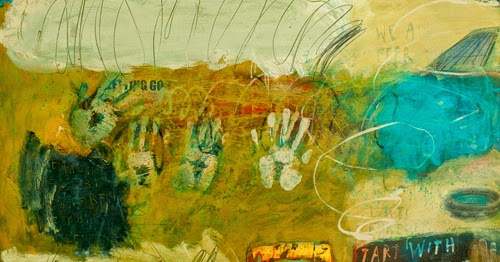 As with most new years we can recall, 2014 began on Jan 1. This was perhaps the only sure thing we knew about the year that would follow. It soon became clear that the 2014 would have its mood swings no matter how many tranquilizers with threw at it. Taking the bull by the horns we hunkered down to ride out what would become a year of challenges sandwiched between layers of life’s little adventures.
Plucking me from our base in Singapore, the US Embassy in China organized two speaking tours canvasing six cities where I spoke to audiences of disabled people and disadvantaged students.
As a consolation, I was offered an exhibition at Beijing’s prestigious Today Museum, which garnered good local media coverage and reviews.
We then once again had to take up our hardship residency at the One & Only Reethi Rah in the Maldives where I painted and taught for the month of February while Angie photographed manta rays, turtles and clown fish.
In March we had the pleasure of joining my sister Roberta and fiancé Ed in Hoi An, Vietnam followed by a visit with our old friend Emmanuel in Saigon.
The biggest bang of the year came from our 35km trek with friend Paul Fairhurst in the mountains of Ladakh, India, which was graciously sponsored and filmed by Johnny Walker.
Back in Singapore for a spell before two weeks painting in Chengdu at the 5 Colors Foundation in preparation for their international exhibition which would open later in October. In early September we headed to California for ‘home leave’ but had not gotten over jet lag before flying Virgin to one of my favorite cities, London, to speak for Diageo.
Once again back in California, Angie and I then caught the new direct flight to Chengdu for the 5 Colors Foundation painting exhibition where we met up with our old friend Dan Keplinger, affectionately known as King Gimp.
Then on my birthday, an inconspicuous email hit my inbox inviting me to lecture and teach on a Seabourn Cruise sailing from Israel to Oman via Jordon and Egypt, which we gratefully accepted. We checked off several ‘bucket list’ spots including Petra, Luxor, Valley of Kings and Karnack.
Then in October, Angie and my joint art exhibition opened at Iwasawa Oriental Art Gallery in Los Gatos following which we finally had a chance to catch our breath and enjoy time with family and friends.
Once again John invited us to fly in his small plane over the big countryside of California and Arizona and a mesmerizing landscape of cactus.
By December we were back in Singapore for less than a week before I boarded Mongolian Airlines to Ulaanbaatar to speak again on behalf of the US Embassy to disadvantaged young people and parents.