The Wimbledon of Painting, 2015 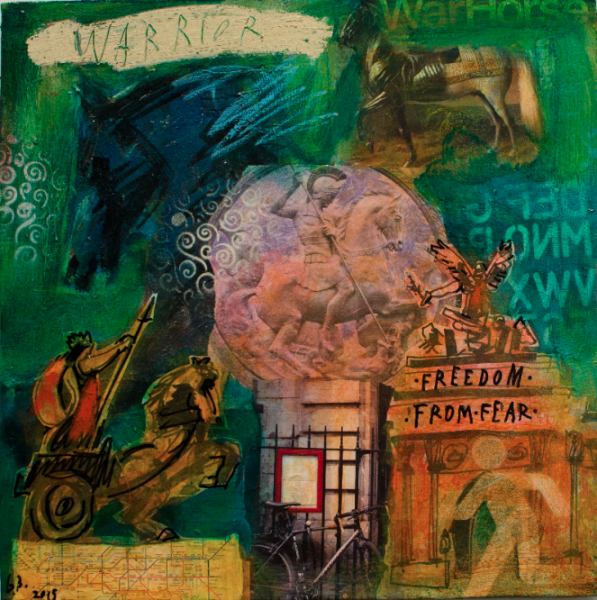 For a month this summer I resided at the Cumberland Hotel across from Marble Arch in the center of London. My purpose there was to create a large mural in busy hotel lobby. To inform the painting, I spent several days touring the city with my sketchbook and worked up 100 black and white drawings of iconic sites. This, along with photos, magazine tear-outs and other memorabilia became the fodder for the painting. Without a clear idea of where it would all lead, I began with some colors before beginning to layer in some structure and collaged images. It was a grand process fueled by local imagery and feedback from strangers.
Top seed athletes battled it out on the grass courts of Wimbledon while I threw paint on my mural. London was buzzing with the event and I was into my second week in front of my 5x16foot canvas. Occasionally I took a break to watch parts of the matches. I caught some wonderful tennis and watched players stay cool and confident even with the odds stacked against them. They were able to pull strength and focus up from their feet and smash balls with power and accuracy exactly when needed. These marvelous athletes reminded me that artists need similar qualities.
Artists battle against their opponents who happen to be themselves. They channel the forces they have nurtured over the decades into a methodology through which they express themselves. They throw all they are and have into what they are making, knowing and hoping that they won’t shatter the magic and loose the point. When it is most dangerous they too must attack. They must stay in the game despite fatigue and enormous pressure. And they must believe that what and how they do what they do is right and essential. Artists are athletes pouring forth everything they are and feel so that their creations might win, and move mankind one step closer to the light.