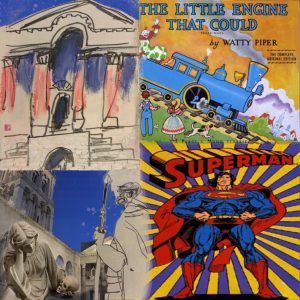 As a child growing up with paralysis from Polio, I intuitively looked for role models to give me strength. Like many boys at the time, Superman held promise and through thick and thin, always managed to save the day. But I also recall nights, crying myself to sleep asking my Catholic God why I was handicapped. Other times, my mother would read me bedtime stories and, “The Little Engine that Could” became my favorite, teaching me that if we think we can, we often can. My childhood wasn’t typical nor was it too complex. But it held promise and hope and I am grateful for the optimism I managed to escape with.

My country and I have changed a lot over the decades. We have tried our best and landed where we are. However, I am truly saddened watching the demise of an America that held such promise. The UN-united States of America have wreaked destruction on themselves with no outside assistance. There is nobody else to blame except perhaps our own ignorance and ingrained sense of entitlement.

Right or wrong, as I grew up, the USA was traditionally seen as a positive light in the world. One might argue that the American, ‘can do attitude’ or ‘power of positivity’ offers both good and bad, but at the end of the day, seeing cups as half full instead of half empty has merit. I believe though not perfect, America once offered an uplifting influence.

I’m afraid that this is no longer the case. With the veil removed, citizens of second and third world countries realize that America also has scores of uneducated people making poor decisions. We used to be seen as a progressive land of good morals and hard work. But I don’t see this anymore and our tenure as a leading nation in the world has lapsed. Unlike the Roman Empire, our trajectory was short lived. Without positive attitudes and roll models to emulate, I’m afraid that the chances of Superman lifting us out of this quagmire are low.

And yet, I want to hope. I want to believe that we can correct our course. And maybe if we think we can, we will. Because the world still needs a bright light, one country that offers a powerfully positive alternative to an existence of mere survival and the status quo. We have always needed something higher to aspire to.