Rebooting in the Empty Spaces 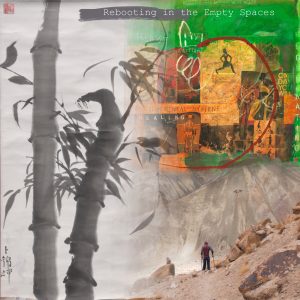 My freshman year at Franklin & Marshall College challenged me to think more deeply about life. Philosophy 101 was no exception. After much procrastination, the hypothesis I set out to prove was that, “events that don’t happen in our lives affect us just as much as incidents that do happen to us.” Okay, maybe I was not meant to be a rocket scientist either but this investigation introduced me to the concept of Yin & Yang.

A decade later I moved to Taiwan to study the Chinese arts or brush painting, calligraphy and seal carving (stone seals not cute furry creatures off the California coast). I learned about “white space’ in traditional Chinese paintings which were areas of the paper or canvas that are intentionally left blank. These voids often indicated clouds, mist; sky or water and these empty spaces were a balance to the ‘busy’ areas of the painting that were occupied by imagery and color. In Chinese calligraphy I learned how to use the brush so as to leave streaks of “flying white’ within my bold black ink brush strokes. These swatches of white broke up the areas of black and like in painting, suggested a balance of opposites. When carving stone name seals or chops, the empty areas around the characters were as important and interesting as the characters or letters themselves. The white spaces defined and complimented the deep vermilion impressions created by the stamp.

Today I find that Covid19 has also taught me something about the absence of content. In my life BC (before Covid) I traveled perpetually and had programs stretching far ahead on my calendar. I moved from one event to the next often times concentrating on what was coming up before finishing what was currently in play. I’d admit my BC life did not have a good balance of emptiness and busyness. Like a complex painting with numerous elements screaming for attention, my life was future facing and I was more focused on outcomes than the pieces along the journey.

So much has changed now with Covid. I have very few plans coming up besides brushing my teeth when I wake up in the morning. There are sprouts of programs and travels that attract my attention, but I find myself more in the white spaces these days. Floating in a cloud or hovering between two bold swatches of color, my life is meaningful in its emptiness. I think I’m rebooting in the white spaces. Taking time to regroup and recharge. Following up on things that fell through the cracks when my canvas was inundated. Today, I don’t have to be the busy brushstrokes bolting across the canvas. I can be the blank whiteness of the paper between the strokes. It’s taken some getting used to, but I’ve come to accept, appreciate and utilize the empty spaces in my life’s canvas.