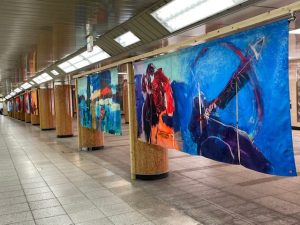 I was extremely honored to be chosen as an artist for the first-ever Olympic Agora commemorating the cultural aspect of the 2020 Tokyo Olympic Games. Orchestrated by the Olympic Foundation for Culture and Heritage (OFCH), the program took place from 1 July to 15 August 2021 throughout Tokyo’s historic Nihonbashi district. The Olympic Agora featured installations by Japanese artists as well as an exhibition of works by six Olympian and Paralympian Artists-in-Residence. In a tribute to the Japanese noren, the traditional curtain-like fabric typically hung in shop and temple entrances; each artist contributed a series of panel “curtains” reflective of the Olympic spirit and values. I was commissioned to create six large screens, each measuring 53in high by 128in wide, which filled the Mitsukoshi-mae, underground passageway in the heart of Tokyo.

Two years prior to the Games, with the support of Iwasawa Oriental Art Gallery in California, we began planning for a major exhibition of my ‘Sports Art’ at a venue in Tokyo. However, when Covid struck, these plans quickly evaporated. But then, just six months before the Games, I received this unique opportunity to exhibit my art on the world stage through the Olympic movement. Though the pandemic prevented me from physically being in Japan with my art during the Games, like a proud coach, I was very excited that my paintings made it to the podium to inspire the residents of Tokyo.

The ‘Olympic Agora 2020-2021’ series includes the six rectangular artworks that were exhibited in Tokyo during the Games as well as ten square ‘Sports Art’ paintings, which I created to commemorate the athletes of Tokyo Olympic and Paralympic Games. Each of these sixteen artworks may be purchased as limited edition prints on canvas or paper in varying sizes. For details, please contact info@gregoryburns.com.