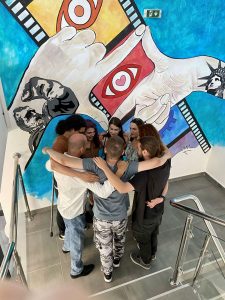 When offered the possibility to soothe fractured souls by leading art workshops for Ukrainian refugees, I just said yes! It seemed like a tiny tangible service I could offer for those escaping the war. I envisioned giving art supplies to children so they would have something to do while their mothers tried to sort out their new reality. Little did I realize I would step on a landmine of Ukrainian determination and contract Covid in the process.

The program initiated by the US Embassy in Prague included three countries, three murals, five art workshops and two keynote talks in three weeks. Royal Talens, an art supply company in Holland I work with, immediately and generously donated art kits for 200 students. 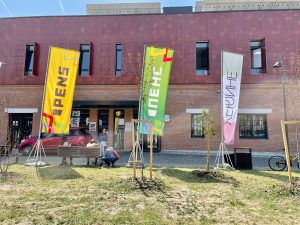 My first mission however, started off in Serbia where along with six local artists, we designed and painted a large mural on the wall of the Novi Sad Youth Center in just 3 days. It was a marathon but a very rewarding experience. During our deliberations, I asked the students what was most important to them, to which they all responded in unison, “Good internet!” But there were other conversations about wars and fighting which as I was told, Serbia has experienced a lot of.

Then I was off to Berlin for workshops with Ukrainian students between the ages of 6 and 16. In Berlin, we conducted three art workshops for Ukrainian youth and their local German schoolmates. From outside appearances, I could not see much difference between Ukrainian and German youth. For the pre-teen students, both groups seemed equally engaged and cheerful. But for the teenagers, there was a notable difference in demeanor. While the German youth were spunky and fresh, some of the Ukrainians were quite somber and reserved. One boy spoke of the 4-day journey he had taken with 12 family members squashed into a Skoda (car) escaping Ukraine. We also saw the simmering rage of a 16-year old boy from Kiev who almost came to blows with his fellow Ukrainian students when the joint painting they were creating together did not coincide with his plan. In confidence, one of the Ukrainian organizers assured me that no land would ever be seeded to Russia. We observed a strong fighting spirit, which I don’t believe will ever be extinguished in these people. The students seemed to be making the best of a bad situation and were adjusting well to their new home despite having no idea of when they might be returning to Ukraine. 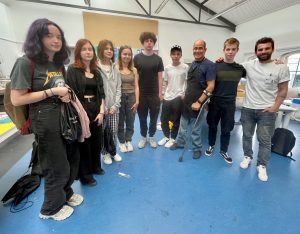 Later, at a church meeting hall, I gave a talk to a group of Ukrainian mother’s with their children who had just started rebuilding their lives in Berlin. They appeared healthy and well kept though understandably quiet. Unfortunately, I was unable to share my slides or videos from my laptop, so everyone adapted and watched my YouTube videos on their phones. We are all adapting. After sharing a bit of my story, I opened up for questions. The reoccurring theme revolved around how as mothers readjusting without husbands, they could make the best of their current situation. A member of the church asked that the Ukrainians voice out their needs so that the German sponsors could know how best to help. Everybody was adapting and adjusting. From what I could see though, these fortunate Ukrainians were being taken care of by generous Berliners. 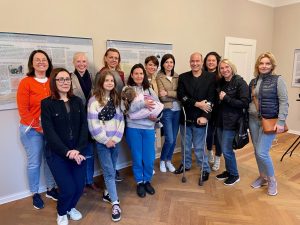 From Berlin we took the train to Prague and then on to Olomouc, where together with Yosifu, a magnificent Taiwanese artist and 18 Ukrainian students, we repainted a large local bus stop inside and out in just one day. I gave my young team free reign to express themselves and leave their mark on Olomouc. These students seemed well adjusted as they laughed and splashed paint about and seemed intent on painting not only the bus stop but their clothes and sneakers too. They seemed resilient and I could not tell from their appearances or attitudes that they had just left a war zone. 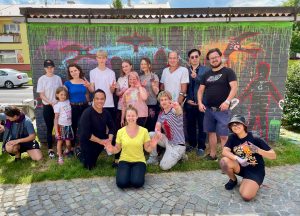 Then on to Prague where Angie and I both tested positive for Covid and our participation came to a screeching halt as we went into isolate in our hotel room. But fortunately, Yosifu was able to host the two workshops with Ukrainian youth and mothers single-handedly with great success. Always good to have a plan B.

These programs validated my core belief that art can bring people to a happy place in their lives. I believe that a few hours playing with paints and friends had a strong positive impact on the lives of these children. And though paint and paintings may never end wars, they can help soften the blows and bring color back into our lives.