Maldives Residency
Featuring Gregory and Angie’s Artist in Residency at the One & Only Resort in the Maldives diving, painting and photographing the world above and below the sea. 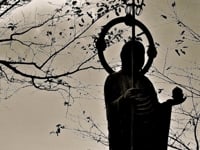 Tokyo Residency
Featuring Gregory and Angie’s Artist in Residency at the Tokyo Shangri-La Hotel with painting journeys around town and a CSR Art program making art with children displaced by the Fukushima earthquake. 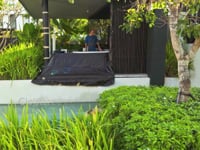 Bali Residency
Featuring Gregory and Angie’s Artist in Residency at Alila Soori where the couple is immersed in the verdant landscape and rich culture of Bali. 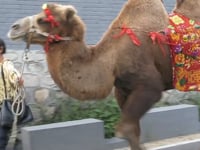 Schoolhouse Residency
Featuring Gregory and Angie’s Artist in Residency at the legendary Schoolhouse Resort below the Great Wall of China, deep in the fabric of China.

Graduating from College and separating from his college sweetheart in 1980, a bit like a rudderless ship, Gregory traveled to the American Virgin Islands to sort himself out. In St. Croix, he wandered the white sand beaches and camped under palm trees and catamarans. On his 3rd day on the island he was alone on a beach drawing when a man approached and asked to see Gregory’s sketches. The man was the owner of the small hotel and restaurant up the beach and invited Gregory in for a beer. He looked over Gregory’s sketches and proposed an arrangement, commissioning Gregory to do artwork for the small hotel in exchange for a roof over his head. It was a win-win situation and Gregory’s first Artist in Residence.

Since 1999, to add a unique offering to an establishment, Ang Arts and Gregory Burns have been successfully engaged by nearly forty premium resorts, cruise lines and residency programs throughout the world as the Artists in Residence with the view to raise the status of the institution and the profile of Gregory’s artwork. Gregory has been free to create numerous series of paintings in exotic locations which leads to a solo exhibition onsite. Often times visitors gain access to a practicing artist in their studio and have the opportunity to take painting classes. In several cases media coverage of the residency and the resulting series of artworks has been extensive (CNN, CNBC, Shanghai TV). Ang Arts has also produced many videos of these residencies that are posted on social media platforms.

One & Only Reethi Rah, The Maldives